You are here: Home | Mormon church | A mission to Scottsdale

Elder Scott Clarke and Elder Ethan Farmer are on a mission from God.

The two young men are serving their mission for the Church of Jesus Christ of Latter-day Saints, but they are not local kids sent to Peru or Botswana. Clarke is from Ohio; Farmer is from Idaho. They have come to the Valley to convert people.

But coming to the Valley is different. For starters, there are already 153,980 Mormons living here, meaning Clarke and Farmer network almost as much as they door-knock. And they will never go hungry.

As their peers go to college or look for fun, Farmer and Clarke look for converts and lead a life that borders on monastic. There are a lot of rules on a mission. You must wear the tie and the nametag. An elder cannot back up his car without his companion elder standing behind the car to direct him. There is no television.

There is no dating. In fact, the two men cannot enter the home of a young woman, defined as younger than 55, without another person being present.

There is a no-swimming rule that stems in part from arcane beliefs that Satan rules the water and partly from the more practical belief that nothing good can come from healthy young men sitting around a pool with girls in bathing suits.

Both elders were advised to, “Lock your heart and leave the key at home. And never open it here.” That expression has become a universal admonition for LDS missionaries. And it is one the church takes seriously. Men and women serving on their missions are expected to be fully focused on their faith, their spiritual growth and the growth of the Mormon Church.

A missionary is allowed to call his family twice a year: once on Christmas and once on Mother’s Day, that’s it – although it often is said that the church looks the other way when it comes to family contact.

In truth, there is not a lot of time for these young people to do anything but work and pray.

At 6:30 each morning, Farmer and Clarke wake for exercise. From 7 to 8 a.m., they eat breakfast, shower and prepare for the day. They dress in their short-sleeve white shirts and dark pants. Their ties are tight up to their necks.

At 8, a two-hour session called companion study begins. Each elder reads passages from the Bible or the Book of Mormon. Then they discuss what they have read.

At 10 a.m., they walk out the door to begin the most visible part of their day. You know it as door-knocking, they call it “tracting,” from the practice of leaving religious pamphlets, known as tracts.

They will be on the street knocking on doors, keeping appointments and looking for potential converts until 9:30 p.m.

When you knock on as many doors as Clarke and Farmer have, you notice many small signs most people miss. Doves, yin-yang, crosses, fish, mezuzot and pentacles may all mean something about the home’s occupants and their faith.

But this being the Valley, homes are bought and sold so often it’s impossible to know whether the symbol is pertinent. Clarke and Farmer knock on every door, trading back and forth on who takes the lead.

Spend the day with these two gentlemen and you will be certain that Scottsdale is a very devout community. In one three-door span, homeowners told Farmer and Clarke they were not interested in learning more about the LDS Church because the occupants were Jewish, Greek Orthodox or Catholic. And all said they were very serious about their faith.

Farmer and Clark wonder whether some of the people are likely “C and E’s.” That’s missionary talk for people who go to their house of worship only at Christmas and Easter.

But they do not appear discouraged. If their earnestness and devotion alone would mean more converts, the Mormon Church would be growing even faster. 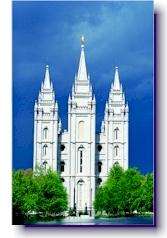 As you might expect, they face a ton of rejection, although people who slam the door shut or scream at them are rare. Far more often is the person who claims to be very busy at the moment. Asked if there is a better time to try back, the elders usually are told no. If they get a generic answer of some time next week, Clarke and Farmer immediately pull out their calendars and nail down a day and time. An appointment is a small victory. They will return.

Watching them work, it is no wonder organizations that rely on door-to-door sales recruit heavily on the campus of Brigham Young University, in Provo, Utah. A common joke is that the next time a well-groomed exterminator salesman knocks on your door, you should ask him where he served on his mission.

Almost invariably, they get nowhere.

But every once in a while they meet a person who is open to their message. Clarke describes that moment.

Adds Farmer: “It is hard work getting there, but it is very sweet. They literally change. They change before your eyes. It’s hard to describe how right it feels.”

Clarke, 21, is from Cincinnati. He left behind his siblings and parents to go on his mission. He is devout and earnest, and takes his praying and proselytizing seriously. He believes his sacrifices are for God, to whom he refers invariably as his Heavenly Father.

Before Clarke left, his father was diagnosed with lung cancer. He died in June while Clarke was here on his mission. Clarke did not return to his family for the funeral. That was his decision, not the church’s. Missionaries who lose family members are allowed to return home if they feel they should. But many do not. They think their mission is that important.

Clarke did not go home because he had already said his goodbyes. Neither he nor his father thought they would see each other again when Clarke left 15 months ago.

“A lot of the things I needed to work out, I was able to do before I left,” Clarke said.

He called his father a great man and an inspiration.

“I know I will see him again.”

Elder Farmer came to the Valley from his home in Pocatello, Idaho. “Yes, I am a Farmer from Idaho,” he says.

At 27, he is older than most of his peers, who traditionally begin their missions at age 19 or 20. Farmer said he was not ready at that time to start his mission. He refers to having been a punk kid, though it sounds more as if he was simply a young man with a little growing up to do.

After graduating from college and working a few years, Farmer knew he was ready, so he approached his church ward to turn in his mission papers.

Farmer’s belief that he needed to be more ready for his mission represents the larger shift in the mission program. Elders Clarke and Farmer certainly fit the bill. Their devotion is clear, their hard work impressive. And they love what they do.

“They say on a mission you have long days and short months. And it’s true,” Farmer said.

One big difference between serving a mission in the Third World and serving in the Valley is the food. There is lots and lots of food.

The two men have been “adopted” by two wards in north Scottsdale. A ward represents a geographic area, and usually consists of a couple of hundred members.

When word went out that two nice young men might enjoy a family dinner, a couple of sign-up sheets were immediately filled by the congregations. Now they have dinners set up with Mormon families every night for the foreseeable future.

Recently, they ate with the Andersen family in their stunning home tucked into the foothills of the McDowell Mountains of east Scottsdale.

The menu was typical. Lasagna, garlic bread, a fruit salad, a green salad and dessert. The elders will not leave hungry. And they do not leave empty-handed. At home is a refrigerator filled with food in Tupperware.

Fifteen months into his mission, Clarke has gained 20-plus pounds. Farmer, a lean 6-foot-5, says he has to work to keep weight off for the first time in his life.

There are other reasons for the dinners beyond feeding the missionaries. The meals are a perfect networking opportunity for Clarke and Farmer.

One reason the Valley is a strong growth area for the LDS Church is that there are already so many Mormons here. People can see the faith and the lifestyle and know whether it may interest them.

More important, Mormon families in the Valley can help steer the missionaries to people who may be ready to convert. After each dinner, each family is asked whether they know somebody who may be interested in joining the church.

In addition to enjoying the company of the missionaries, the night provides another benefit for the Andersens. They have a son currently on a mission in Panama. By feeding these two young men, Teresa Andersen hopes her own son is eating well.

“You hope there is a woman in Panama doing this for your son.”

After dinner with the Andersens, Farmer and Clarke were not yet finished with their day. In contrast to the devotion of that Mormon family, they met with a young woman in a Scottsdale apartment who was unsure of her beliefs.

When Clarke and Farmer enter the apartment of Debbie Ryba, 26, the Chicago-area native is watching her beloved Cubs. She could not get herself to turn the game off as Clarke and Farmer spoke about God, but she was willing to put it on mute.

Sitting on her leopard-spot futon couch, Ryba tells the elders that she thinks religion is a good idea for some people, just not for her. “I don’t believe anything until I see it myself.”

She listens politely but clearly is not open to their message. Still, they forge ahead.

“You are a daughter of God and he loves you,” Clarke tells her.

While her roommate watches the interaction warily, Ryba tells them that in the big scheme of things, she does “not know if anything is actually knowable.”

After getting nowhere for half an hour, the young men thank her for her time. They will check in with her the following week. She says she will read some of the Book of Mormon. They tell her she will be in their prayers.

The men have faith that she will be ready for the message at some point.

At least she listened.

(Listed if other than Religion News Blog, or if not shown above)
The Arizona Republic, USA
Sep. 21, 2005
John Faherty
www.azcentral.com
, , ,