Revelations that a smear campaign against the political left was secretly funded by an ultra-conservative Christian sect reflects a worldwide trend, a religious studies lecturer says.

Seven members of the Exclusive Brethren last week admitted being behind anti-Labour and anti-Green pamphlets distributed in Auckland, Wellington and Christchurch.

National leader Don Brash initially denied knowing anything about the $500,000 campaign, but later confessed he had met with the group and knew who was behind it.

In an editorial printed in the Sydney Morning Herald today, Victoria University of Wellington lecturer, Dr Marion Maddox, said the Exclusive Brethren’s eruption into the election scene pointed to “a broader coalition of right-wing business, political parties and religion”.

“In New Zealand, a loose coalition is now pushing New Zealand down a right-wing path, as seen not just by the emergence of the Exclusive Brethren, but by the rise of the pentecostal church-based Destiny Party, the “family-focused” United Future (formed from a 2002 merger of the centrist United party with Future NZ, an explicitly Christian party), the largely evangelical-funded conservative Maxim Institute think-tank, and even a branch of the Christian supremacist Parliamentary Prayer Network.

Because Exclusive Brethren believe Government is ordained by God, they do not vote.

However, in recent years – particularly in Australia and the United States – they have started involving themselves in political lobbying. 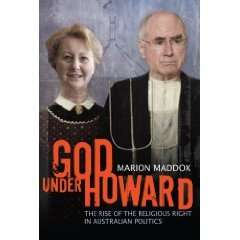 In the United States elections, the Exclusive Brethren spent more than $US500,000 ($NZ720,670) on newspaper advertisements supporting George Bush and the Florida Republican Senate candidate, Mel Martinez, known for opposing gay marriage and hate crimes legislation, and linked to the Republican strategy for turning Terri Schiavo’s 15-year coma into a “great political issue”.

Dr Maddox, the author of God Under Howard: the Rise of the Religious Right in Australia, said with so much money and power at their disposal, it was “no wonder even moderately religious politicians such as Howard and avowed agnostics such as Brash, are hitching their stars to the conservative Christian comet”.