CHICAGO: A 224-storey pyramid shaped building, the tallest in the world, is being built at Katangi, near Indian city of Jabalpur in Madhya Pradesh state. The 2222-foot (677m) Center of India Tower scheduled for November 6, is being financed by Maharishi Mahesh Yogi (The Beatles former spiritual leader), and will be his new world headquarters. The firm designing this tower are known for a previous large development, the Twin Towers in Battery Park City, New York.

Meanwhile, a twisting 115-storey glass and concrete tower that would be the United States’ tallest building may soon grace Chicago’s lakefront, its developer said yesterday. 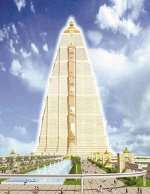 Critics compared the proposed 2,000-foot (610 metre) Fordham Spire to a giant candle fit for a cake, while others said it was out of place in a post-September 11 world in which landmark skyscrapers could be terrorist targets.

The tower, which would house condominiums and a hotel, is the brainchild of Christopher Carley, chairman of Chicago-based Fordham.

It was designed by award-winning Spanish-born architect Santiago Calatrava, who is known for his curvaceous bridges, as well as for designing the winged addition to Milwaukee’s art museum and the transportation center to be built on the site of New York’s Ground Zero.