Why the 10-story church was built there is a mystery

ELDORADO, Texas – The workings of the nation’s largest polygamist sect have long been shrouded in secrecy, but there’s nothing inconspicuous about the majestic white temple the group is building here in the heart of Texas oil and gas country. 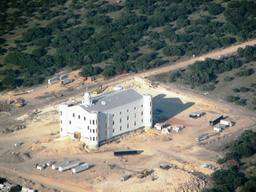 FLDS temple under construction at the FLDS Ranch
in Eldorado, Texas. Photo from Eldorado FLDS

Warren Jeffs and his Fundamentalist Church of Jesus Christ of Latter Day Saints have been closed-mouthed about their intentions since buying the 1,691- acre ranch where the temple is being built in 2003.

And just why the sect would forsake its longtime two-town domain along the Arizona-Utah border to come here to build its first temple is a mystery.

Clearly, though, the massive limestone structure portends some big plans that Jeffs – a fugitive from justice, with his sect being pressed hard by authorities on several fronts – has for Eldorado.

“This is the first temple the FLDS has ever built,” said J.D. Doyle, an Eldorado Public Schools official and a small plane pilot who regularly flies above the sect’s property. “They call it the YFZ Ranch. YFZ means Yearning for Zion.”

Zion, in the sect’s teachings, is where the righteous will take refuge when the sins of the wicked destroy the world.

That’s a notion that makes folks here nervous. Many remember the bloody 1993 FBI standoff with members of the Branch Davidian cult across the state in Waco, where David Koresh and 80 of his followers died.

But Schleicher County Sheriff David Doran has worked to prevent any such end-of-days conflagration in his jurisdiction.

“After they moved here and we realized who they were, we invited them to a meeting,” Doran said. “They came in and told us about their religious beliefs.”

Doran has built a rapport with several men at the YFZ and even has the telephone number. He’s hooked up relatives who have filed missing persons reports with people at the compound.

Doran has visited the compound 10 times, made three trips to the group’s Arizona-Utah border communities and traveled once to Jeffs’ relatively new enclave in Mancos in southwest Colorado.

Jonestown was the community in Guyana where cult leader Jim Jones led 900 of his followers to their poisoned-punch deaths in 1978.

“I’ve asked the people at the YFZ about it and they said it was the worst thing that they could do in their faith is to take their own lives,” said Doran.

But the question remains, why Eldorado?

One hundred miles north of the Mexican border and 310 miles southwest of Dallas, the area is known for its ubiquitous oil and gas rigs, for cotton fields, and for its cattle and goat ranches.

Some speculate that Jeffs picked the area because the land was cheap.

Others suggest Texas may have been attractive because up until this year – when the state legislature moved decisively against the polygamists – 14-year-old girls could marry with parental consent and stepparents could marry stepchildren. The Texas law that seals birth records for 75 years also may have been a lure to men with multiple wives and many children.

Those familiar with the Bible note that Jeffs bought the Isaac Ranch. Isaac was the beloved son of Abraham whom God asked the patriarch to sacrifice, but then rescued when Abraham complied.

Whatever the reason, since David Allred, Jeffs’ business agent and son-in-law, purchased the ranch for $700,000, sect work crews from Arizona and Utah have built the estimated 90,000- square-foot temple, a limestone quarry, a cement plant and a guard tower that’s manned 24 hours a day.

In flyovers, Doyle and others have watched the temple being constructed from its deep (an estimated two underground stories) foundation on up.

“That temple is built like a fort. It would take a bunker-buster to get in there,” said Doyle, who has extensively researched the sect on the Internet.

The observers also have seen women and children plant by hand several acres of vegetable gardens and fruit trees. They’ve counted more than a dozen 10,000-square-foot or bigger dormitory-style homes go up, as well as a commissary, a dairy, a chicken house and a community center.

Scott Sutton, the Schleicher County appraiser, said the appraisal notice mailed to Jeffs’ sect in May estimated the value of the buildings at $7.9 million.

Sutton wasn’t allowed in to measure the temple. Size estimates came from Randy and Kathy Mankin, owners of the Eldorado Success newspaper, circulation 1,200.

In flyovers, Kathy Mankin took photos from which the newspaper calculated the size of the temple, which rises almost 100 feet – or 10 stories – above the ground.

The Mankins also checked the temple’s measurements against the mainstream Mormons’ first temple in Nauvoo, Ill.

As the story unfolded in the Eldorado Success and the construction continued at a frenetic pace, the state of Texas worked to make the sect feel less welcome.

Rep. Harvey Hilderbran, R-Kerrville, represents Eldorado. He sponsored a bill to make bigamy a felony and raise the Texas marriage age from 14 to 16. His bill also made it illegal for stepparents to marry their stepchildren.

In doing so, he researched the sect’s home base in Colorado City, Ariz., and Hildale, Utah.

“What has happened in Colorado City and Hildale has taught us not to wait for this situation to grow into an unstoppable problem,” said Hilderbran.

Although his bill died in the House, a Senate-House conference committee added the language to a Senate bill on child protection. Gov. Rick Perry signed the Senate version on June 6.

“I hope to prevent Texas from succumbing to the practices of taking child brides, incest, welfare abuse and domestic violence,” Hilderbran said.

“I would advise that Colorado do the same.”

That the polygamists would come to Schleicher County, with its 1,699 registered voters, has caused no little amount of concern among the locals.

Our Lady of Guadalupe Parish church is on County Road 300 that leads to the YFZ Ranch. Deacon Victor Belman rides his bike on the road around the YFZ Ranch, giving polite, West Texas waves to the men in white pickup trucks and vans with Utah and Arizona plates.

“They never wave back,” he said. “It’s the fear of the unknown that’s bothering everyone. I pray for them. I know they are hard workers. But what is their focus?”

Others in Eldorado have practical concerns – water, schools and political power.

At Pat’s Hair Salon, customer Gloria Kent said water was a big issue because the community relies on wells drilled as deep as 400 feet or more into the caliche limestone.

“Wells here run out of water all the time,” said Kent. “If that religious group gets twice as big as the town, they could drain our water supply. That’s pretty scary.”

In the next chair, Stacy Juereck said she was worried about the schools because Jeffs and the sect took control of the schools on the Arizona-Utah border and drained their resources.

“We love our schools. They’re one of the best things about this community,” she said. “I just hope it doesn’t end up like the other place.”

Others fret that if the polygamists end up numbering in the thousands, they could overpower the locals and run Schleicher County politically.

Justice of the Peace Jimmy Doyle, J.D. Doyle’s father, verifies new voter registrations and said no one from the YFZ Ranch has signed up to vote – yet.

Justice Doyle is one of the few townspeople ever allowed into one of the buildings at the YFZ ranch.

One of Jeffs’ wives, Barbara, died there of breast cancer in July 2004. Doyle had to issue the death certificate.

“Her twin sister was with her,” he said. From his own research on the sect, he learned that Jeffs likes to marry twins because they’re compatible.

Asked about the risks to Eldorado, Justice Doyle said he takes heart in the vigilance of the sect’s neighbors and the local pilots.

“This place is well-enough watched so that if something happened, we’d know about it,” he said.

There are Texas polygamy baseball caps and posters with Warren Jeffs’ picture that ask, “Can you think of anything more scary?”

The community may have the last laugh, said pilot J.D. Doyle.

West Texas is oil country. Allred and Jeffs may have missed one detail about the YFZ Ranch – other people own most of the mineral rights, the warranty deed shows.

If the majority of mineral rights owners want to drill on the land, the property owner can’t say no, said John Griffin, an attorney for the Texas Railroad Commission, which manages oil and gas operations in the state.

“From the air, there’s a line of oil wells leading right up to the temple,” said J.D. Doyle.

In the first week in June, a drilling exploration rig went up on a neighboring ranch, about 200 yards from the YFZ Ranch fenceline.

“There are enough rich oilmen out there who’d put a drilling rig next to the temple just to see the look on their faces,” J.D. Doyle said.

Multiple wives and the law

• In Colorado, bigamy is a Class 6 felony, with a sentencing range of one to two years.

Habitual offenders face up to eight years in prison, according to state sentencing guidelines.

• In Utah, bigamy is a third-degree felony punishable by up to five years in prison.

In 2003, the state legislature made taking a wife under 18 a second-degree felony with a prison term of up to 15 years.

• In Texas, the legislature this year made bigamy a third-degree felony, punishable by up to 10 years in prison and made marriage to a child under 16 a first-degree felony with a prison term of up to 99 years.

Marriage to a girl 16 to 18 is now a second-degree felony with a maximum of 20 years in prison.

And, it a third-degree felony for stepparents to marry their stepchildren, punishable by up to 10 years in prison.

• A Teenager’s Tears: When Parents Convert to Polygamy by John Llewellyn

• Keep Sweet: The Children of Polygamy by Debbie Palmer

• Polygamy Under Attack by John Llewellyn

• The Polygamists: A History of Colorado City, Arizona – An Inside Look for the Outsider by Benjamin Bistline

• Under the Banner of Heaven by Jon Krakauer

Web sites with information on polygamy: