JERTEH: The commune of the Sky Kingdom deviationist sect is located at Kampung Batu 13 near Kampung La, about 20km from here. 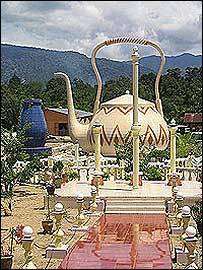 Its famous structures are hidden from the view of passing motorists by the oil palms and and bushes.

The Besut District Land Office had on April 28 ordered Che Minah to tear down the structures, claiming it was built illegally on agriculture land.

However, she ignored the order.

The office later summoned Che Minah in May to hear her reasons for not demolishing the structures. She ignored this notice too.

The case is now before the Kuala Terengganu High Court as she had obtained leave to commence judicial review on the demolition order.

She named the Besut District Land Office, the state government and the Land and Mines Department as respondents.

Her counsel Haris Mohamed Ibrahim had on Sunday filed the papers for the judicial review and is awaiting a hearing date. 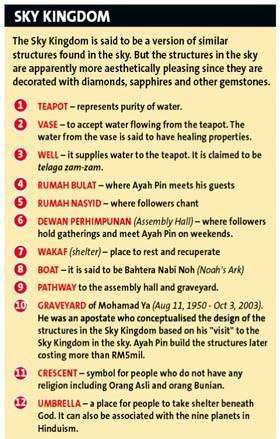 Pending the outcome of the hearing, the judge granted a stay of any further proceedings in relation to the demolition order.

Sources said the structures cost more than RM5mil. They were built over a 10-year period.

The sect is currently constructing a double-storey building near the giant teapot, which would be used to “strengthen the commune’s relations with people from other countries.”

It is also planning to build more buildings in a neighbouring site once it has enough funds.