ST. GEORGE — Doomsday scenarios and rumors of an impending mass suicide by faithful members of the Fundamentalist Church of Jesus Christ of Latter Day Saints are spreading fast on the World Wide Web.

Several Web sites predict a short and grim future for the FLDS, saying that the church’s leader, Warren Jeffs, is saying the world will end Wednesday, the 175th anniversary of the founding of the LDS Church.

“We have our own intelligence inside the FLDS community, and we believe there’s a high probability that absolutely nothing will happen,” said Washington County Sheriff Kirk Smith, whose jurisdiction includes Hildale, a small FLDS community adjacent to its virtual twin, Colorado City, Ariz.

The Web sites, however, warn the FLDS could be setting up another Waco, Texas, where on April 19, 1993, after a 51-day standoff, 76 people died in a fire that broke out during an assault by the FBI at a religious compound.

Other sites say Jeffs could be another version of Jim Jones, who led 914 followers in Guyana into mass suicide Nov. 18, 1978. Or Jeffs is preparing a mass exodus of his most ardent followers to the new FLDS community in Texas, leaving thousands of members behind because they are not “pure in heart.”

The dire predictions are regarded by several people inside and outside the FLDS church as hype by opponents hoping to create trouble.

Much of the news-media frenzy now facing the FLDS church centers on its doctrine of plural marriage and on Jeffs, who arranges the marriages and has excommunicated dozens of prominent men and reassigned their wives and children to other men.

Jeffs is also being sued in 3rd District Court on child-abuse allegations and for control of the United Effort Plan Trust, which owns most of the property in Hildale and Colorado City. According to court documents, Jeffs has not responded to either civil lawsuit, prompting a default judgment to be issued against the 48-year-old leader of the largest polygamous church in the country.

One of the key sources of speculation was when Jeffs, who has a reported 50-70 wives, surprised many of his own followers about a year ago with news that he had purchased nearly 1,700 acres of ranch land in sparsely populated west Texas for a new FLDS community. Leaders of the Eldorado Success newspaper in Schleicher County, Texas, get weekly updates on the site. Photos of a massive building that resembles one of the first LDS temples are posted, as are pictures of large houses, a dairy operation, rock quarry, orchards, gardens, a warehouse and other buildings. 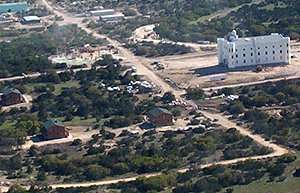 The FLDS agent, Allen Steed, then revealed the reason he gave for purchasing the ranch was merely a ruse intended to keep the public and news media out of church business. Ever since Steed admitted he lied about the church’s intentions for the land, public interest has skyrocketed in the FLDS property.

“If they wanted to be left alone, that didn’t help their cause very much,” said Schleicher County Sheriff David Doran after hearing the explanation. Doran soon leaped headlong into learning all he could about the FLDS and its people, including taking several trips to Washington County and Colorado City.

When it comes to the veracity of doomsday predictions, Doran said he’s not buying any of it.

“Down here in Texas, we’re aware of what they’re saying about April 6. I do not expect anything at all to happen, though,” the sheriff said. “What I do expect is a lot of media interest. The biggest thing that might happen may be a gathering on the ranch of the faithful for a temple dedication.”

Doran said he speaks often with sources on the FLDS ranch, which Jeffs named the YFZ Ranch after a song he wrote titled “Yearn for Zion.”

Construction on the ranch has been nonstop for many months, the sheriff added, and there is no indication that those who occupy the land are planning to leave it anytime soon.

“They continue to get their trash hauled to the landfill, and their wastewater hauled to the county’s wastewater treatment plant,” Doran said. “That tells me they’re planning on sticking around.”

Doran said he is negotiating with his source inside the YFZ ranch to allow him access to the property on Wednesday.

“The main reason I want to be there is to deflate all this hype and concern,” Doran said, adding that he and a deputy would be happy to park their truck under a nearby tree for the day. “Our vigilance will be geared toward outside interest on the ranch rather than what’s going on inside the ranch.”

Both Doran and Smith said an investigator with the Utah Attorney General’s Office has expressed concern about April 6.

“I trust our intelligence more than theirs,” Smith said. “We’re the ones on the front lines. We’re going to continue doing what we think is best.”

Colorado City Police Chief Sam Roundy, who is no longer certified by Utah to work the Utah side of the border town, said the rumors are “ludicrous.”

“This rumor will go by just like all the other ones we keep hearing about,” said Roundy, who is a member of the FLDS church. “None of these predictions or dates that are given about the end of the world is coming from the FLDS church authorities. It’s a bunch of nonsense. The scriptures say that no man knows the time or day of the Lord’s coming. These rumors are not coming from here.”

(Listed if other than Religion News Blog, or if not shown above)
Deseret Morning News, USA
Apr. 5, 2005
Nancy Perkins
deseretnews.com
, , ,